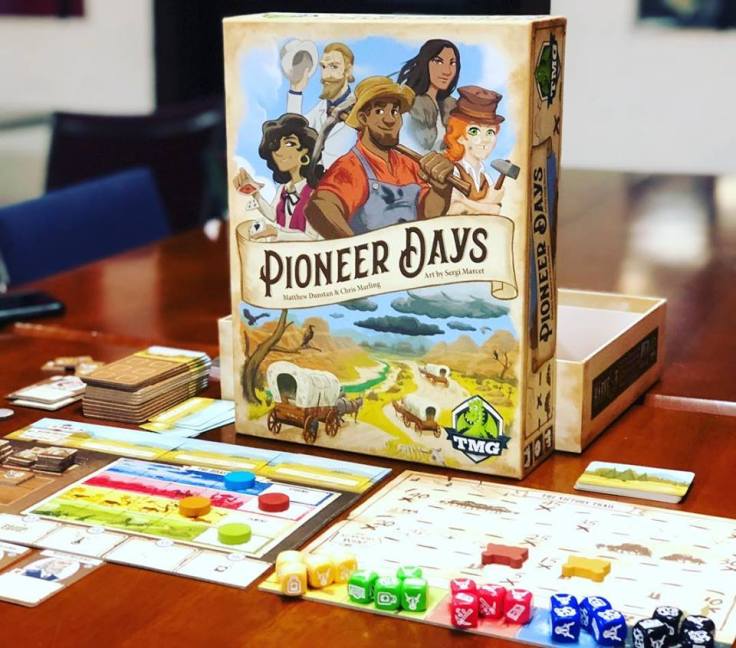 “Saddle up and guide your wagon train along the perilous Oregon Trail! Build a team of hardy folk and gather resources and equipment with a unique dice drafting system. But dangers await in the dice you don’t choose! You can hire townsfolk, buy wagons, pan for gold, and take on cattle — all the while preparing for inevitable raids, storms and famine. Who will best face the perils of the wild frontier and lead their wagon train to victory?”

Pioneer days is a 2-4 player dice drafting game by Matthew Dunstan and Chris Marling, the artwork is done by Guille Longhini and Sergi Marcet and published by Tasty Minstrel Games.

This game is probably best suited for those that like medium weight games, it could be boring for someone that only enjoys heavy game as the strategy, like most TMG games, is on the lighter side. I however, am a lover of all games that are heavy and I absolutely loved this game.

Game Round Summary: Each round the first player will draw an amount of dice equal to the amount of players, plus 1, and roll them.

Each player will take turns drafting a die in clockwise order, placing it on the appropriate reward slot. That player can then choose that reward showing on the die, or the money indicated above it, or the townsfolk placed below it on the game board.

After each player has drafted a die and collected their reward. The die left over will advance one of the disaster tracks matching that die’s colour. If it’s a black die left over, it will advance each track rather than just one. If a disaster is triggered, you must pay the cost, if you cannot, then you suffer the consequences, either silver coins, loss of cattle, damage to your wagon, or the death of townsfolk.

Gain any end of round bonuses triggered by your townsfolk, as well as end of round VPs for cattle, etc. You will then also have an opportunity to trade in resources for favour tokens (VPs) based on the demand cards at the end of each round. Then you start a new round, passing the first player marker clockwise. The game is played over 5 rounds and then you move to end game scoring.

Artwork: Stunning! The iconography is clear and the game isn’t cluttered. Simple and elegant. All the little details on the cards, the player boards, and how it all seems to match up and fit when placing items in your wagon, but most of all, I love that I place my little cows behind my caravan on my player board, and they fit perfectly in the artwork. The little things really shine through in this game. Shows how much thoughtfulness went into the design.

But the thing that stood out to me most was representation of race and gender among the main characters available as well as the townsfolk. This always means a lot to me when seeing women and people of colour represented in games. Thank you TMG and Guille Longhini and Sergi Marcet for being thoughtful and inclusive in your game!

Components: Amazing as always! TMG is above the grade when it comes to components, this game is no different. The card stock is nice and durable, the cardboard pieces are very thick, I know they won’t bend of warp, the wooden pieces (cows, turn marker and point tracker) are all good quality. The dice are printed clearly and easy to read, even when sitting across the table.

The only complaint I have is that the different player markers for scoring are varying shades of brown, light, medium, medium-red and dark brown. So if you weren’t really paying attention it can be hard to remember who is who.

2 Players – Good. The dice available for drafting is scaled to the amount of players. However, some of the card effects that would allow you to gain resources from other people are less meaningful in a two player game. The conflict between players is lower when it comes to being able to pick townsfolk as a lot of the end game scoring repeats, so you’re likely to still get what you want. The other issue is that it was harder to plan for dice to be rolled as the probability of getting a certain die face each turn was much less likely as the first player.

3 Players – Great. I really enjoyed the tension at this amount of players. There were moments when your character was taken, there was also more variety when choosing your dice, so you could plan a little better being that you were more likely to see the dice you wanted rolled as the first player making easier to plan for future disasters.

4 Players – This player count would represent the desperation on The Oregon Trail a little more accurately. You’re not likely to get the townsfolk you want, and you’re way more likely to be subjected to opposing negative effects and disasters as it’s harder to plan and keep resources. So if you like tension and more mayhem, play it at 4 players!

Replayability: Moderate to High, the amount of extra cards and tiles given means that you will never see the same combination of end of round bonuses, equipment and townsfolk. Not to mention that each of the starting characters each have a different ability that might shape the way you play.

Overall Thoughts: TMG continues to deliver great games, with great components at great prices and this game is no different. It’s a fun game, with just enough take that to keep things engaging, but not making it so punishing that it becomes unfun to play. The game rounds move quickly as you can’t overly plan your turns.

If you’re a fan of dice placement games this is one to add to your collection.