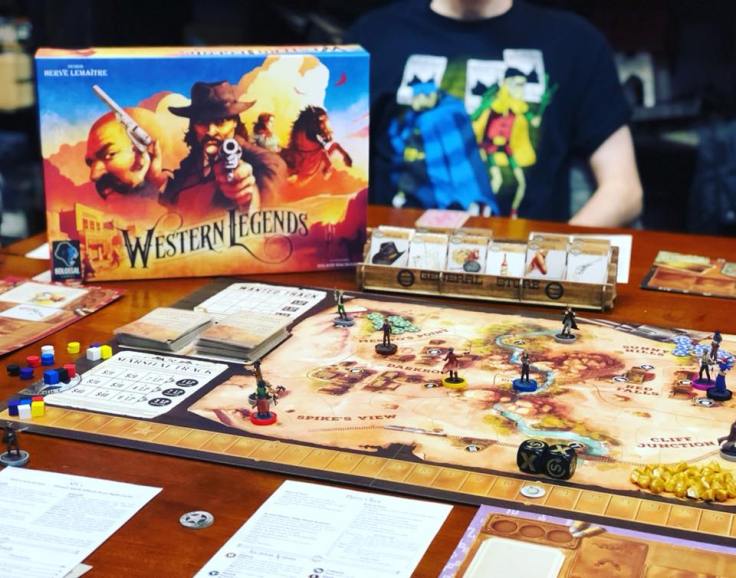 “Will you become an outlaw? Rob the bank, rustle cattle, and steal from other players. Or will you become the Law? Fight bandits, wrangle cattle, and arrest wanted players. Only one thing is for certain: history only remembers the most legendary! How will you write your name on the face of history?”
Western Legends is a 2-6 player game set in the Wild West by Hervé Lemaître with artwork by Roland MacDonald and published by Kolossal Games.

Box Game Length: 60-90 minutes Actual Playtime: 90 minutes-240 minutes. Seriously, allow at least 3 hours for your first time playing and at least 2 for each time after that.

Game Weight: 2.67/5 This game is fun but isn’t very complex. It’s easy to understand and teach to new players. I wouldn’t say that you have to be very experienced to understand how to play, this is definitely new player friendly.

Each and every action you take in the game is something you would expect to find in a western theme. Whore houses aka the “cabaret” yeah.. mmmhmmmmm a cabaret, poker, gold mining, etc.

The story cards are amazing and super fun to read. They help immerse you in the Wild West, especially if players all agree to speak with a southern accent (our favourite part).

Sadly, one of the parts of the game that I found missed that theme was that you could choose to be good or bad with any character. IMO, there are certain characters that shouldn’t have an option. For example, Wyatt Earp should not be allowed to be wanted, and Billy the Kid should not be allowed to be a marshal. It’s strange and really ruins the thematic integration part of it for me. 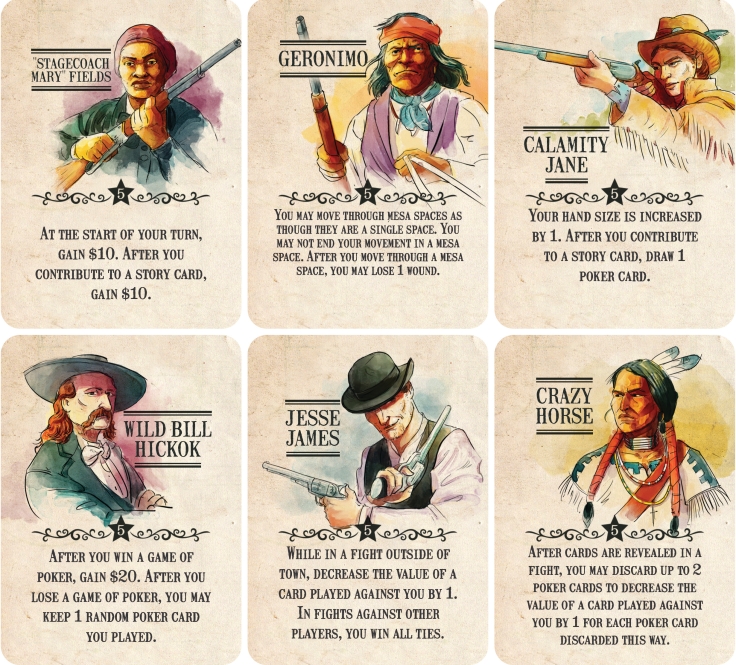 Objective: Your objective is to earn the most legendary points by game end, the game can end at either 15, 20 or 25 points, and you get legendary points/money in a variety of ways: you can gamble, drive cattle, prospect for gold, rob the bank, fight bandits, pursue stories, become an outlaw, keep the peace, etc.

Game Round Summary: Each round, you will have 3 actions to perform, you can choose to do any of these actions more than once.

1- Moving across the board. Typically you get to move two spots, but with the help of a mount, you can increase your reach. Typically you will move to get to a location you wish to do an action, or to trigger one of the story a achievements.

2- Fighting another player. When you fight another player, each player chooses one poker card from their hand, effectively the highest value wins. There are some items that alter the values by 1 or cards that have special abilities that trigger wounds, etc, but really it’s a game of war.

3- Taking a card action. The poker cards you accumulate throughout the game will sometimes have actions on them. They can do a number things, do having more of these means you have more options.

4- Lastly you can take an location action. Locations offer a number of different choices, you can goto the general store to purchase items which help you become more efficient, the cabaret to spend your earned or stolen money on legendary points, you can go mining for gold, that you would will then deposit at the bank for money and legendary points.

Turn proceeds clockwise until the end game is triggered. Then the round finishes and each player starting with the first player gets one final turn. 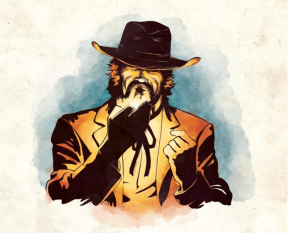 The artwork is beautiful! Each card has a unique watercolour piece, including each of the different poker cards. It’s clear that a lot of work and love went into making this game.

The game board is no different. It’s really pretty, but the town outlines aren’t clearly defined, especially when there are minis on it. I hope that in subsequent printings they make those outlines a bit thicker. 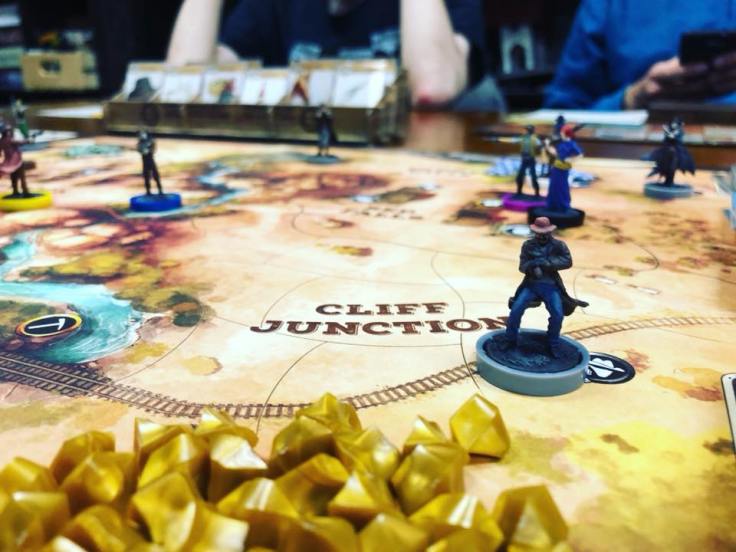 Component quality is okay at best. There are a lot of minis, but they aren’t very detailed making them difficult to paint, if you’re into that kinda thing.

The cardboard player boards are thin and never really lay flat, so your cards/tokens often move around on top of them. It’s not the end of the world, but I would have loved to have thicker player boards.

Definitely not what I would expect for the price tag.

2 Players – I haven’t played two players yet, so I can’t comment unfortunately.

3 Players – This player count offers less interaction, especially being that the most important/interesting things to do in the game are highly player interactive. The Marshall/Wanted track are so important, and those jobs need to be equally distributed to keep things interesting. At 3 players there just aren’t enough characters to make using the tracks interesting and meaningful.

4-5 Players – This is the best player count in my opinion. It’s quicker and more interesting, with a bit of downtime, more wth 5 players obviously, but with just enough players so that there’s diversity in the Marshall/Wanted track. Provided that people aren’t all choosing the same track.

6 Players – Just no, the game was way too long for what you got out of it. There wasn’t much more player interaction, but way more downtime. The time between turns wasn’t even spent watching other players because what they did meant little to nothing to what you were doing. I would say to avoid this player count if you can. It does function, but isn’t great.

Replayability: Low. The decision making in the game aren’t very deep, each choice is a repeat of a previous one for the most part. There are clearly better choices when it comes to making legendary points, which is a shame because some of the other actions, like poker, are interesting but not nearly as lucrative as say something like gold mining -> bank -> cabaret.

Even with the sheer amount of different character choices, their different abilities, and personal objectives you choices in the game aren’t much different from one player to another making gameplay pretty boring after the first couple plays.

Overall Thoughts: The game is beautiful, and fun the first couple times, but shallow.

In the end, I was hoping that each action was going to be more meaningful. This is very apparent by the fact that you can ignore what everyone else doesn’t on their turn and still have no issues playing your turn. Which isn’t so bad at 4 players as turns are fast, but at 6 players it was really just a bore.

All in all I can see this being a game that sees less play as time goes on without the implementation of some expansions that fix the issues.

I think the general store needs more variety in items so that there are different win conditions that aren’t as obvious. Maybe something that rewards gambling more, or some of the less obvious win conditions.

I dunno, I really wanted to love this game, and parts of it I really do love. But overall, the game just misses a too many marks, coupled with the too long playtime, its repetitiveness and expensive price, it’s a game I’m glad that I didn’t back on Kickstarter.

Don’t get me wrong, it’s not a bad game by any stretch, I just get much more from other similar types of games for cheaper than this one.