“The king demands a castle! You are a world-renowned master builder who has been asked by the Mad King Ludwig to help design his castles. Projects of such significance require the expertise of more than one person, so for each assignment you are paired with another master builder to execute your grandiose plans. Will your planning and collaborative skills be enough to design the most impressive castles in the world? “

Between Two Castles of the Mad King Ludwig is a 3-7 player (with a 2 player variant) tile drafting/laying game designed by Ben Rosset and Matthew O’Malley, published by Stonemaier Games, with artwork by Agnieszka Dąbrowiecka, Laura Bevon, and Bartłomiej Kordowski.

Thematic Integration: High. The theme of buildings is important to the function of the game. When you’re laying tiles, they are being built in the same way you would build rooms and floors in a building. You can’t really have a room just floating in mid air. Similarly, underground rooms need to be underground, etc.

Objective: Your objective in Between Two Castles of the Mad King Ludwig is to build the best of the lowest scoring castles. Yes, you heard that correctly, the highest of the lowest.

While playing, you will be working on two castles simultaneously with your partner to the right and to the left. At the end of the game, your lowest scoring castle will be the only one up for contention.

Then the best of the lowest scoring castles is deemed the winner. In that respect, you can’t simply focus on one single castle while playing. Both need to be worthy!

Game Round Summary: The game is played over 2 rounds. Each round, you will select a stack of 9 tiles and draft 2 from that stack and then pass the remaining tiles to the next player, either to your right or left. We typically alternate right and left between both game rounds.

After everyone has selected their two tiles, you all flip your tiles and then discuss with your partner where to place them in the castle to optimize scoring and bonuses.

Do this until there is one tile remaining, discard that tile and then proceed to the 2nd round.

Artwork: Wow guys, just wow. Much like all of Stonemaier games, the artwork is a show stopper. Agnieszka, Laura, and Bartłomiej did not hold back! There’s so much detail and hidden gems in this game, including a really awesome Scythe room! 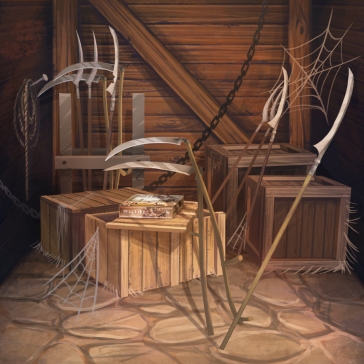 Unfortunately, a lot of the beautiful detail is lost in the small tiles. You have to look really close to spot some of the small things that could be easily missed. So take some time to peruse through the tiles to admire the talent. My favourite tiles are probably the Kitty and Puppy rooms. Ugh, too much cuteness in a tile! Did I mention Corgis are my fave! 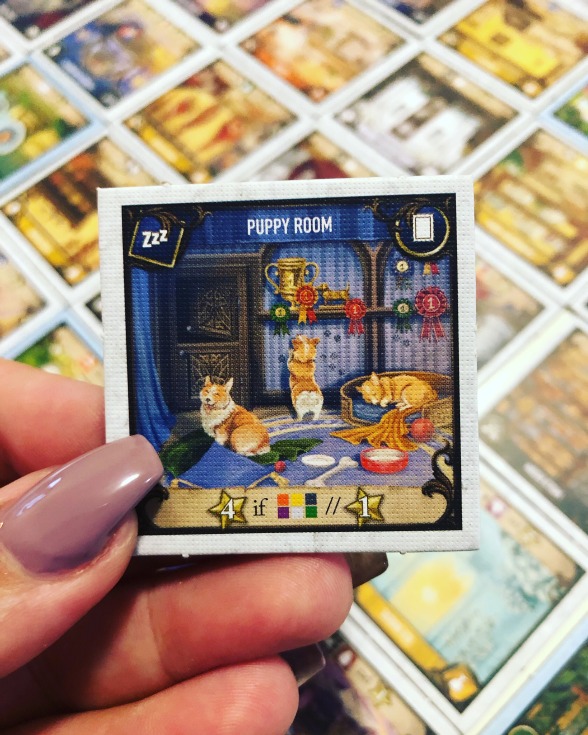 Components: Let’s talk Game Trayz. I know this can make or break a game for you, and they are always a HUGE hit when offered as a stretch goal on any Kickstarter Project.

Some games they are nice to have, other games they are a necessity, with this game, it’s a necessity. If it wasn’t for the game trays, set up and take down would probably take twice the amount of time and be a nightmare. Not to mention them functioning as holders while playing the game. Simply take the trays out and your game is basically ready to go!

Paper stock quality in both the rulebook and cards is outstanding as usual. Super soft to the touch and made to last. The cardboard tiles are nice and thick and won’t warp.

The other cute thing is that each castle has it’s own unique wooden castle meeple, 7 different ones to choose from!

The surprising part for me was that this was all done and available for around 45$ MSRP. It’s hard to find a great quality game for that price, let alone one with such a fantastic insert.

2 Players – In the two player variant, each player builds a castle with “Ludwig”. Tiles are shuffled and two are chosen randomly. Then assigned to each of the castles shared with Ludwig by the player to the right, then the player to the left the following round. The scoring works the same in that the lowest scoring castle between both players and Ludwig will be the one to be scored. So it is possible for Ludwig to win.

Personally, I much rather the 2 player variant found in Between Two Cities. Each player chooses and builds two cities, or in the case of Between Two Castles of the Mad King Ludwig, two castles. At the end of the game, when counting scores, you add both castles together and the player with the highest combined score wins.

It’s a more solitaire way to play, but it feels less random than the official variant. So give both ways a try and see which you like more! There’s no wrong way to do it.

3 Players – 7 Players – There really isn’t any difference between playing 3 players or 7 as game play is simultaneous and you are only playing with the players next to you.

Replayability: The game is quick and has statistically low chance of building a similar castle as each of the 147 regular room tiles are unique. Seriously guys, 147 unique tiles!

While they are functionally similar if they are the same type of room, when it comes to their bonuses and scoring, they each have a unique demand for room type adjacent to them.

Because of it’s simple rules, ease of teaching and speed of play I never really tire of playing this game.

Overall Thoughts: I wasn’t in love with Between Two Cities, but I did enjoy playing it. Conversely, I do love Castles of the Mad King Ludwig, so I was thrilled to see this awesome mashup. I mean, who doesn’t want to build a castle with no bathrooms and 8 dungeons?

Stonemaier is one of my favourite publishers and I haven’t been let down by them yet. The huge attraction for me, other than it being a Mad King tile laying game, is that it supports up to 7 people. Finding a game that plays that many that isn’t a party game is difficult, let alone one that plays in under an hour. It was a no brainer to add this to my collection.

My one and only complaint of the game is that it’s impossible to know where you stand point wise. I guess for less competitive people, this might be a good thing as it’s always a huge surprise in the end who won. For those that are a little more competitive like me, I like to know how many points I have while playing which you couldn’t really do unless you spend a tonne of time keeping track, which kind of defeats the purpose of playing this fast paced game.

It’s a pretty big hit with new gamers and kids as well because there really isn’t a wrong way to build your castle. It might not win until you familiarize yourself with the nuances of room scoring, but there’s no real barrier to play, especially given the fact that it’s semi-cooperative.